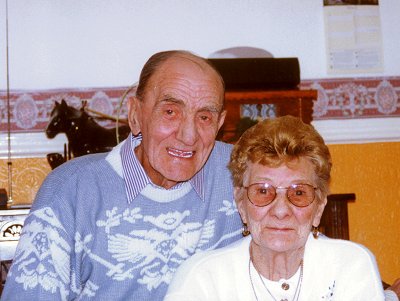 Horace and Anne Morris, seen shortly after their Golden Wedding, 2001

In 1951, I got married to Anne at the Methodist Church, Wolverhampton Street, Dudley. Anne and I had to go into lodgings, where we stayed until 1955 when we moved to Anne's parents in Albany Crescent, Bilston. In that respect we were no different to thousands of other married couples, because in the early fifties it was virtually impossible to get a council house, and few working class people earned enough to buy their own home.

We stayed there until January 1958 when we were finally allocated a two-bedroom flat on the Carder Crescent Estate, Bilston. We had wanted to live in Bilston because that is where Anne's roots were. But this, unfortunately, was where our troubles began.

The land on which the estate was built had been bought under the Compulsory Purchase Act from Bradley & Foster. That company, who also owned a plant at Darlaston, were manufacturers of steel and cast iron shot used in the shot blasting industry. From the day we moved in we had nothing but trouble from their factory, which still operated on the land next to the houses.

The method used to make the shot involved the melting down of scrap metals on an open hearth furnace. The outlet chimney from the furnace would belch out thick black smoke, which at times covered our entire estate, like what was known in that era as "smog". A brown dust would settle on windows, and housewives were known to have pegged their washing out and, when going to fetch it in, they would find it dirtier than when they put it out. Net curtains were covered with a film of this dust getting in through open windows.

There were similar problems with another firm, called W. Perry, which was also close to the estate in Highfields Road. This firm made steel-rolls for use in rolling-mills for making steel billets and coils. These rolls could be anything up to 20 feet long and 6 feet in diameter. When they were of no further use to the firm's customers, W. Perry would take them back, and cordite blast them into tiny fragments. The pieces could be melted down again to make new rolls.

The blasting was carried out twice a day at 10.00 am and 3.00 pm. There were twelve loud blasts at each session. Once one of the fragments came through the roof of our flat. I still have that relic; it looks like a piece of wartime shrapnel. While the blasting was going on an employee with a red flag halted traffic on Highfields Road, at the Railway Bridge.

These were just two of our major problems. Incidents like this encouraged us to form a local protest group. The Carder Crescent Smoke and Air Pollution Committee was started by myself and my neighbour, Ken Gretton. I took on the role of chairman and Ken became secretary.

Just before Christmas 1959 a large contingent of itinerants invaded the estate and set up camp.  They were still there at the end of February.  Enough was enough and we thought that action should be taken.  As a result at 6.30 a.m. one Sunday Ken Gretton got a knock on his door.  When he answered it, there on the doorstep was the Town Clerk of Bilston, Mervyn Williams! He said "We're moving them".  Ken had to get up and watch while the heavy gang, employed by the council, removed the itinerants from the estate.

As a committee, our greatest difficulty was the fact that both the firms causing us problems came under Coseley Urban District Council, while we were just over the boundary in Bilston. We started a long drawn out campaign of public protest meetings. We corresponded with each of the responsible health committees, and held endless discussions with councillors, Members of Parliament, and people from the Ministry of Health in London. We did, from time to time, see some small improvements.

On April 1st 1966, Bilston UDC was amalgamated with Wolverhampton Borough; and Coseley UDC went in to Dudley Borough.

It's another story really but there was a great campaign to keep Bilston out of Wolverhampton.  People tried all sorts of stunts.  I remember that Bob Campbell, a tory councillor who kept a fish and chip shop, wrapped the fish and chips in paper on which he had had printed: "If we go in to Wolverhampton, you've had your chips".  But we lost and we all had to adapt to the new situation as best we could.  Bob Campbell became the first mayor of Wolverhampton after the amalgamation.

We decided our influence would be increased by winding up our existing committee and starting the first Bilston Tenants & Residents Association. After forming that Association we did start achieving more.

During 1967 W Perry, the steel rolls firm we were in dispute with, found a less objectionable method for fragmenting their product.

In view of all the remaining problems we decided to apply for a rate reduction for the whole estate. Every tenant was sent a rate reduction application form. So we put some tables and chairs outside on the estate and encouraged all the tenants to come and fill in their forms. Someone must have told the police that something was going on because a Police Inspector arrived by car and wanted to know what was going on. When I explained to him he said we should have notified the police of the event. But he let us carry on. I offered him a cup of tea which had been brought out by someone on the estate. He made a start on it and then put it down hastily: it had been liberally laced with whisky, just to keep the cold out. He left and we got all the forms completed.

In those days we had to deal with all sorts of problems.  One day someone knocked our door while I was out and told Anne that a dog had bitten a boy on the estate and he was in hospital.  Could we do something about the dog?  Anne got into a car and came looking for me, just as I was coming back from a meeting in Dudley in someone else's car.  We immediately drove both cars to the police station and all of us charged in. Who should meet us there but the same Police Inspector!  He didn't seem too pleased to see the awkward squad.  And he did nothing about the dog.

On another occasion at my workplace, when a fellow employee had been dragged into the machinery (and died three days later), I attended the scene of the accident.  The police were called.  Who should turn up but the same Police Inspector!

When all the forms had been sent in we got a call to meet the Rating and Valuation Officer, a Mr. Pittock. Ken and I went along. He made us an offer of a reduction, which we refused because it was not enough. He then upped the offer and we accepted it. As we left he put his arms on our shoulders and said: "Gentlemen, today you have made history". He explained that this was the first time anyone had got a rate reduction for a whole estate (in this case 150 houses) without going to court.

From 1967 onwards we had numerous meetings with the Health Committees at Wolverhampton. But one meeting we had at Dudley was not only with their Health Committee but also with the management of Bradley and Foster. This was a most cordial meeting, when we were able to convey to Bradley and Foster�s exactly what the position was, including certain malpractices of their employees such as lighting the furnaces with old tyres, which we had found was the cause of the black smoke.

I am sure that the crowning glory of our association came nine months later in 1968 when we were told that the cast iron plant was being moved to their Darlaston site.

I must add that I later became an employee of the company myself and I worked for them at Bilston from 1974 to 1981. The company is now known as Metabrasive.

Members of our committee assisted other areas in establishing their own residents' associations. Many of those original tenants' groups still survive today. There were a number of attempts, mainly lead by Councillor Ted Lane and the then Housing Manager, Maurice Barton, to set up an umbrella body for Wolverhampton Tenants' Associations but these did not succeed until in 1969 Ken Gretton and I called a meeting and managed to establish the Wolverhampton Federation of Tenants' Associations.

One of our problems on the estate was repairs and maintenance.  In those days we did not think much of how council employees operated.  We had a story of the new employee who, on his first day at work with the Council, asked his boss for a broom.  "You don't get a broom" said the boss.  "Then what am I to lean on?" the worker asked.

One of our major campaigns was for a Tenant' Charter. In those days council tenants seemed to have no rights at all and no control at all over their own houses. We wanted to change that. This was not just a Bilston and Wolverhampton problem so we corresponded with other tenants' associations all over the country. From this we were able to establish a number of points to be contained in the Charter. We had to get the Charter into an Act of Parliament so that it would apply to all tenants everywhere and whether their own local council liked it or not. We got Bob Edwards, the M.P. for Bilston and Coseley, to sponsor a Bill. When the draw was made for private members' bills it turned out that Robert Maxwell had a much higher draw than Bob Edwards and he offered to promote the Bill. From what we know of Robert Maxwell now, it seems extraordinary that he was important in passing this important piece of legislation.

Over about 35 years most of the work I have been talking about was done by Ken Gretton and me, and our respective wives. We had to pay our own expenses for such things as stationery, postage and all travelling. In 1974 Ken Gretton was awarded the MBE.

Although Anne and I left Carder Crescent in 1993, I am still an active member of St Chad's Tenants Association.  This year, 2001, Anne and I celebrated 50 years of marriage - and found ourselves in the local papers again, but this time in much happier circumstances!