Jim was born on 21st September 1904 at a house in Station Road, Albrighton, next to the school. He was the 7th child out of 10.

His father owned a small engineering company in Stafford Street, Wolverhampton, (opposite the Britannia). The firm, which made carpenters tools, cramps, etc., must have been quite successful as the family house was a substantial one and Jim remembers such holidays as the one in which the whole family spent a month on a houseboat at Stourport, opposite the Tontine Hotel.

In 1908, aged 3, Jim told his older brother than when he went back to school he, Jim, was going with him. The usual starting age was 5 but his mother knew the Head Mistress who therefore knew Jim, and she allowed him to start as he had declared he would - at the age of 3 .

In 1910 the family moved to North Road, (not Street), Wolverhampton and Jim started at Red Cross Street School.

In 1912 Jim went on to St. Peter's school, then, of course, still in the town centre on a part of what is now the University's main site. He started in Standard 2 with a Miss Hadley as his teacher. He was put into the church choir. At Christmas that year was moved up to Standard 3. In effect he gained a year.

By the age of 12 he was in Standard 7 but by now the World War was on and the school was three teachers short. He was moved up to Class X7 that, theoretically, was taught by the Headmaster;  but no teaching of this class really took place. The effect was that Jim's schooling actually ended when he was 12 years 11 months old.

His father's business then failed, a casualty of the War. So Jim left school on a Friday in July and on the next Monday started work as an office boy at Guys in the Rate Fixing Office, under the head rate fixer, Horace Amis. He was paid 8/- a week. He was not quite 14 years old.

Jim was in the rate fixing office for 3 months. At that point Mr. Hugo, the Technical Director, wanted an office boy in the Jig and Tool Drawing Office and asked for Jim to be transferred there. His main duty was looking after plans and documents, getting them out as required and then returning them. Jim immediately discovered that there was no system for ordering documents, recording who had them or when they came back. So he invented one and made the office abide by it. 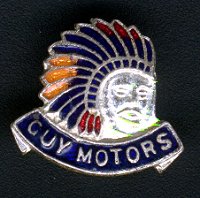 A small enamelled lapel clip of the Guy logo, probably issued to staff

Jim started night school at Old Hall Street in the September after he started at Guys. He paid 1s. 6d. for the course - and you got the second year for free if you passed the first year. In 1920 he went on to the Tech in Stafford Street to take the Science course and got the Ordinary National. He was not happy with the Higher National course and never completed it, but this did not stop him eventually becoming as member of the Institute of Automobile Engineers and a Member of the Institute of Mechanical Engineers.

Stanley Guy lived in Albrighton at Albrighton Hall, now a nursing home. He was not a good mixer - but he did manage to get a lot of Wolverhampton people to invest money in the firm. He was highly ambitious and a lot of people thought he got above himself.

At the time Guys seemed to be nearly always nearly bankrupt.  Jim's feeling is that the company was not well organised, lacked clear management direction and drive; and it was only two world wars which kept them going

In the First World War the War Office ran competitive trials for a 30 cwt army vehicle. Sydney Guy sent along his 50 cwt lorry, which outperformed all the others but was greatly over the weight limit. So they had to take weight out of it, which they did by drilling holes everywhere and then amending the working drawings to suit.

E J B D Buckney had designed the 50 cwt lorry. He was a first rate engineer who fairly soon left the firm for a government job.

At the end of the war the company held an Armistice Dinner for all of their employees and every one of them, including Jim, was given a small, real silver, medallion, celebrating the event and thanking them for their contribution to the war effort.

During the First World War, when they were supposed to be fully engaged in war work, they spent a lot of time designing a motor car.

Thus, in the Autumn of 1918 Sydney Guy was able to produce his new motor car, the Model F. The chassis was put on view in the works canteen for all the work force to see. Guy,s aim was to make the first 100% British car and to compete with his old employers, Sunbeam. But because it was 100% British it was too expensive. It probably had a Meadows engine. In any event Henry Meadows had one, which was probably given him in exchange for his producing the engines, and he drove it around for years. It was, however, the only one Jim ever saw driven round Wolverhampton.

The car failed and all those who had worked on it were sacked, including everyone in the Jig and Tool drawing office, except Jim, who was still on 8 shilling a week even though he had graduated to a drawing board. He was moved to the design office and stayed there until, at the age of 21, he was getting 25 shillings a week as a junior draftsman.

In 1925 Jim saw an advert in the paper for a Jig and Tool Draftsman at Charles Haywards. He wrote and asked for £2.50 and got the job. Haywards made side car frames (not the rest of the sidecar) during the summer; during the winter they made wireless sets - probably for someone else. Jim's job here seemed somewhat unreal. Hayward asked him to design a jig for manufacturing a lever, which he did in 5 minutes. He was then, eventually, asked to design a system to wind radio coils by machine. He worked on this, spending a good deal of time watching the girls in the factory winding the coils by hand, but Hayward never again asked about the work.

It seemed as if each Spring there was a fire at Haywards.  These fires destroyed all the wireless sets which had not been sold. So after each fire a number of workers were declared redundant. This happened to Jim in 1926.

So in April 1926 Jim got a job at Dormans in Stafford but this was just as unreal a job and there was no real work. He was not surprised to be made redundant in July, as a result of the General Strike. Jim had cycled from Wolverhampton to Stafford and back every day during the Strike as no other transport was available. He remembers that each day he was passed by one of the company's bosses in his car. They exchanged greetings but it never occurred to either of them that he might have been given a lift.

Jim then got a job with Beans. That was a good job with real work, where his varied experience was appreciated amongst men who had all started and been trained at Beans. He stayed there for 2 years before moving to Goodyear's, with whom he spent the rest of his working life, eventually working more as a manager than an engineer, travelling all round the country and all round the globe, including war work as a civilian, still employed by Goodyear's, but spending months in Egypt reporting on army vehicle tyres in the desert war.