Most of us have memories of going to the local cinema so we decided it would be a good theme for an exhibition,  and judging by the good turnout we had we were right 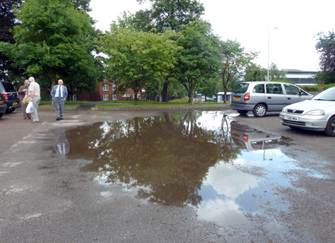 Although it was rather a wet day,
it didn’t dampen the spirit of our visitors.

Like most other towns Bilston had its share of Cinemas. The earliest was probably the Electric Palace, owned by Bilston Electric Theatre Ltd. Films were later shown at the Town Hall by the Wood family who came to Bilston in 1910.
It wasn't long before the Wood family took on the lease of the Electric Palace. This was opposite the Town Hall, where Professor Wood also showed films. By 1921 the Alhambra Cinema on High Street had opened. Woods held had the lease until 1927. Opposite the Alhambra was the Savoy, yes you guessed it, this was also owned by the Woods. On the 17th November Woods Palace, Lichfield Street opened its doors. Sadly by then Joseph Wood had died and his son Thomas Reay Wood continued the business.

The Woods family lived at Mount Pleasant, Bilston. Their home still stands and is now the Bilston Conservative Club.
The garden gate to the front of the building bears the name ‘Woodlands’ although the gate is falling into disrepair lets hope the house does not.

Back to front page